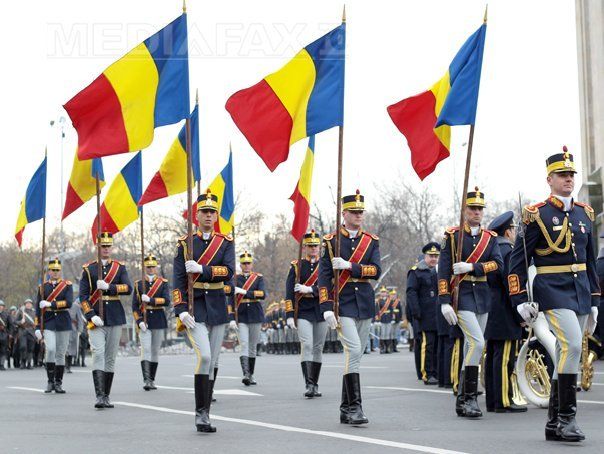 The short answer is ”unification and freedom”, and the theme is probably a common one among many other countries in the world.

For Romanians, December 1st is the Great Union Day. On this day in 1918, during the reign of king Ferdinand I, Romania made of Moldova and Wallachia at that time – was united with Transilvania, Crisana, Banat and the Maramures area.

Romania of that time also included the Republic of Moldova (Basarabia), Banat and the Cadrilater area, which are no longer part of today’s Romania. In 1918, with this unification, Romania almost doubled its territory.

Later on in 1940, Romania lost Basarabia and Bucovina in 1940, after the Molotov-Ribentrop pact, the two regions being annexed to the Soviet Republic. The north of Transylvania went to Hungary, while the south of Dobrogea (the Cadrilater area) went to Bulgaria.

December 1-st is a free day in the country and in capital Bucharest it is usually celebrated with a military parade in Bucharest.

Elsewhere in the country, various events are organized, commemorating the Romanians who died during the First World War. In recent years, various city halls like to organize concerts to celebrate the day, turning this more into a popular celebration.

We are looking for housekeeping staff who can take challenges, have a positive attitude, service-minded, friendly … END_OF_DOCUMENT_TOKEN_TO_BE_REPLACED

Despre: Winter season is getting close, and Arctic Guide Service is once again ready to take a lot of visitors to go … END_OF_DOCUMENT_TOKEN_TO_BE_REPLACED

Calificări/aptitudini: Industrial mechanic, or other type of mechanic with good understanding of main mechanical … END_OF_DOCUMENT_TOKEN_TO_BE_REPLACED

We are looking for housekeeping staff who can take challenges, have a positive attitude, service-minded, friendly … END_OF_DOCUMENT_TOKEN_TO_BE_REPLACED